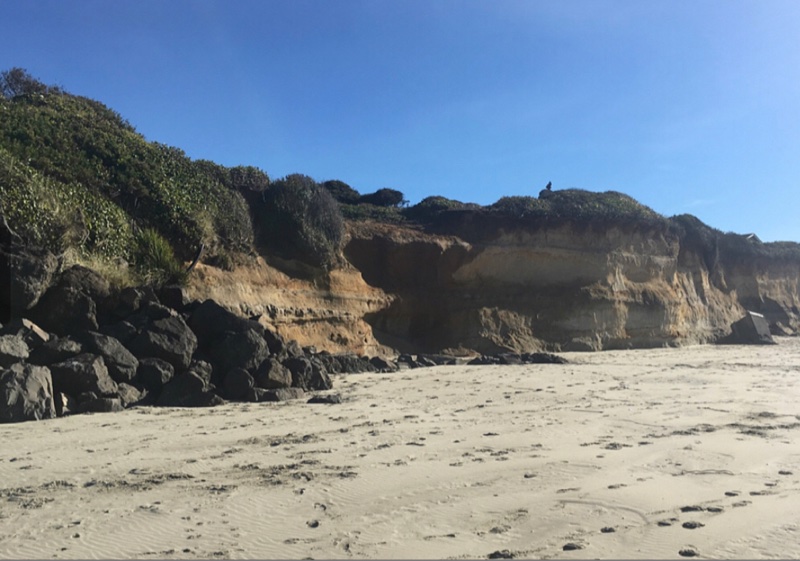 For many slope failures traversing Highway 101, these cliffs form the base of active slides that already move a little every year, said the study’s corresponding author, Ben Leshchinsky, a forest engineering and civil engineering researcher at OSU.

The findings are especially impactful for slides along the 360-mile-long coastline that are highly susceptible to “toe erosion” – the removal of buttressing material at the base via waves or river scour.

“The really big slides, the monstrous landslides that span hundreds of acres, are so large and driven by water that their instability is less dominated by erosion,” Leshchinsky said. “But the ones that are highly exposed to erosion from the ocean, if we see increased extreme events like storm surge, then we’ll see increased bluff erosion. These creeping landslides that are already active and moving every year, they’ll move a lot more. If erosion increases 10 percent, slide movements might increase by 20 or 30 percent.”

Also known as slow earthflows, the slides are prone to gradual movement, the result of being marginally stable to begin with, coupled with seasonal changes in the water pressure within their soil.

Fluctuations in groundwater levels are primarily what drive changes in pore pressure and in turn landslide movement, but undercutting and “toe retreat” also play key roles, Leshchinsky said. As a bluff’s toe erodes, the soil in the bluff shifts gradually – sometimes ending in collapses that can topple houses and bury roads such as Highway 101, which runs the length of the Oregon coast.

“What’s going on may often be imperceptible until a landslide begins to compromise infrastructure like underground utilities or roads,” he said.

“The smaller progressive slides are particularly sensitive to movements and undercutting,” he said. “Our model shows the shorter-length landslides are proportionately more destabilized by the removal of buttressing materials.”

The observed rates of landslide advance demonstrate sensitivity to changes in erosion rates, he said, highlighting the potential impacts of increased future wave attack or fluvial erosion – both of which could be exacerbated by a changing climate.

“The sensitivity of slope movements to the rate of these processes highlights the importance of gathering coastal erosion data over time, especially considering estimates of future sea level rise and possible changes in the magnitude and frequency of coastal storms,” Leshchinsky said. “If we can decrease erosion, then for some of the smaller slides, we could, potentially, arrest or slow slide movement significantly.”

Options for decreasing erosion include dune-stabilizing vegetation where applicable, seawalls, riprap and revetments.

Revetments are sloping structures placed some distance from a bluff. They are designed to absorb wave energy before it hits the bluff. Newer armoring technology, like dynamic revetments, characterized as cobbles placed along the toe of sea cliffs, have also been used to absorb wave energy, but require significant quantities of material and frequent maintenance.

Riprap refers to large, loose boulders; placed at the toe of a bluff, it provides stability in the manner of a flying buttress. But its use in Oregon was severely restricted in the early 1970s by the state legislature, which sided with critics who called it an eyesore that ruined beaches and caused erosion elsewhere.

“There is some truth that riprap, by virtue of preventing erosion in a given location, may shift erosion elsewhere and slows the creation of new sand, which often comes from the sea cliffs failing and degrading into new sand,” Leshchinsky said. “However, in limited, controlled applications to conserve exposed critical infrastructure, the benefits may outweigh the cost.”

ODOT and the US Department of Agriculture supported this research. Findings were published in AGU Journal of Geophysical Research: Earth Surface.

County On Track To Move To Phase 2 Next Monday